Not all site focus on  semi-automatic sheet screen printer！

Cash in advance is one of the most secure payment terms for sellers, and the least secure for buyers. Indeed, Seller ships the goods to the buyer only after receiving the full (or partial) payment for the goods (upfront payment).

Payments are made by wire transfer or by company checks (in the US).  In the project materials industry, cash in advance payment terms are rather rare and may occur for stock and fast-track deliveries only.

What is “TT Payment”?

A bank transfer, otherwise called telegraphic transfer or telex transfer (“T/T”) is the electronic transfer of funds from a buyer/importer to a seller/exporter, via a bank or a similar institution.

For most countries and banks, as a buyer confirms a wire transfer, the funds cannot be recovered from the beneficiary (such payments are irrevocable). ACH payments may be an exception, i.e. they can be revoked.
T/T payments expose the buyer to high risks.

Alternative payment risks, described below, have been introduced to minimize the payment risks for buyers (and suppliers) in international trading operations.

Under open account payment terms, the supplier ships the goods to the buyer without receiving upfront payments and collects the due amounts at a later date (15, 30, 60, 90 days or more).

Discounts on the invoice face value may be granted, on the sale invoice, for anticipated payments.

This type of payment, which is quite common, has an opposite nature to “cash in advance”, as it is very favorable for the buyer and unfavorable for the seller (who bears the full payment risks).

Payments in open account are generally accepted by suppliers with low negotiation power or by suppliers that have long-lasting relationships with the buyer.

A common trait of these types of contracts, which are generally expensive, is that they actually cover the creditor in case of bankruptcy of the debtor but they do not cover the seller when the buyer rejects payment for any due or undue cause.

When a buyer disputes a delivery, the insured seller has to turn to the Law, and not to the credit insurance company, to get the payment. 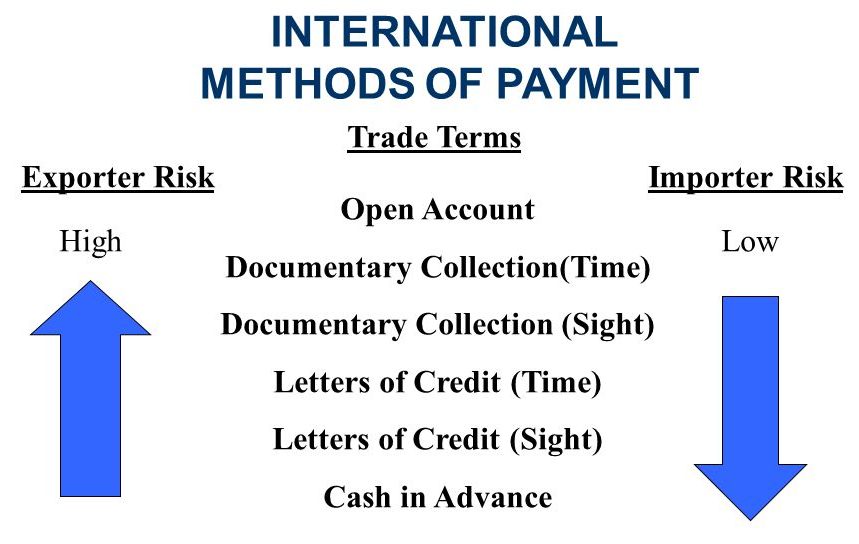 Under this payment terms, the seller gets paid and the buyer and the seller exchange the documents representative of the goods and the payment via the intermediation of a remitting and a collecting bank).

This type of payment works in this way: 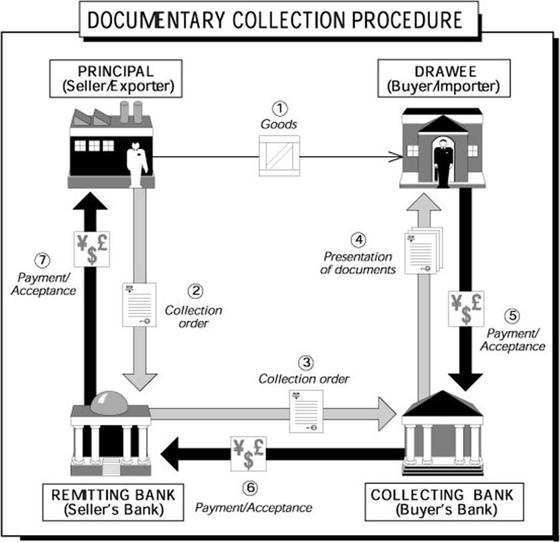 CASH AGAINST DOCUMENTS (“CAD” or “DP”)

CAD is a payment term in which an exporter instructs his bank to hand over the shipping documents to the importer when the importer fully pays the accompanying bill of exchange or draft.

Under a CAD agreement, the seller receives the payment of the goods if the buyer pays the due amount and withdraws the pre-agreed documents (generally through its own bank).

The advantages of CAD are:

This payment term is represented in the illustration below: 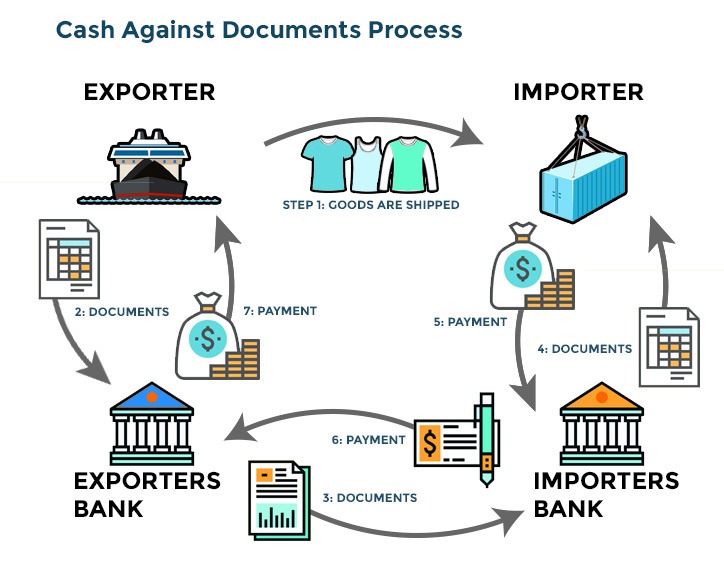 Risks of Cash Against Document Payment:

The main risk of CAD payment term is that buyers may not collect the goods and the shipping documents after the shipment has taken place.

Hence, DAP is a very different arrangement than the payment by letter of credit, where the seller basically no payment risk in case compliant documents are sent to the issuing bank within the validity of the credit.

Due to this fact, sellers shall be very careful with DAP payment terms as they generate unpaid invoices and excess stock.

A Letter of Credit, simply defined, is a written instrument issued by a bank at the request of its customer, the Importer (Buyer), whereby the bank promises to pay the Exporter (Beneficiary) for goods or services, provided that the Exporter presents all documents called for, exactly as stipulated in the Letter of Credit, and meet all other terms and conditions set out in the letter of Credit.

A Letter of Credit is also commonly referred to as a Documentary Credit.

Letters of credit are used between trade partners that do not know themselves well, are located in remote locations and do not accept the payment risks of other payment terms as open account, bank transfer, and, cash against documents.

The terms “Letters of Credit” /or L/C) and “Documentary Credit” (D/C) have the same exact meaning. The first is more common in USA and Asia, whereas the latter is common terminology in Europe.

HOW TO ISSUE AN LC

Before issuing an LC, the importer shall have approved credit limits sanctioned by the issuing bank.

Moreover, imports and exports transactions that involve foreign currencies are subject to foreign exchange regulations and other International rules like UCPDC 600, URR etc.

Generally, the issuing bank requires the importer to submit an LC Application form to issue a Letter of Credit.

After receiving the application, the bank issues a draft LC that the importer and exporter can review and, in case, amend. As the LC is agreed between the parties, the issuing bank submits the LC to the exporter advising bank, who in turn informs the seller. As an LC is received, the seller can start the manufacturing or delivery operations with strong payment security. 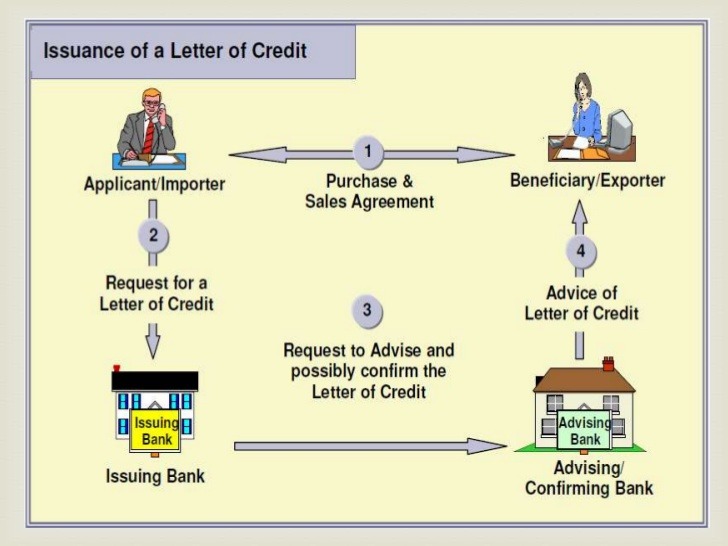 TYPES OF LETTERS OF CREDIT

There are a few types of letter of credit, the most common are:

The transferable form allows the intermediate seller to apply to the nominated bank with a request of transferring the letter of credit in whole or in part to the supplier (the second beneficiary).

In case the intermediate seller purchases products from multiple suppliers, it has the right to instruct the nominated bank to transfer the letter of credit by parts to each of the suppliers. 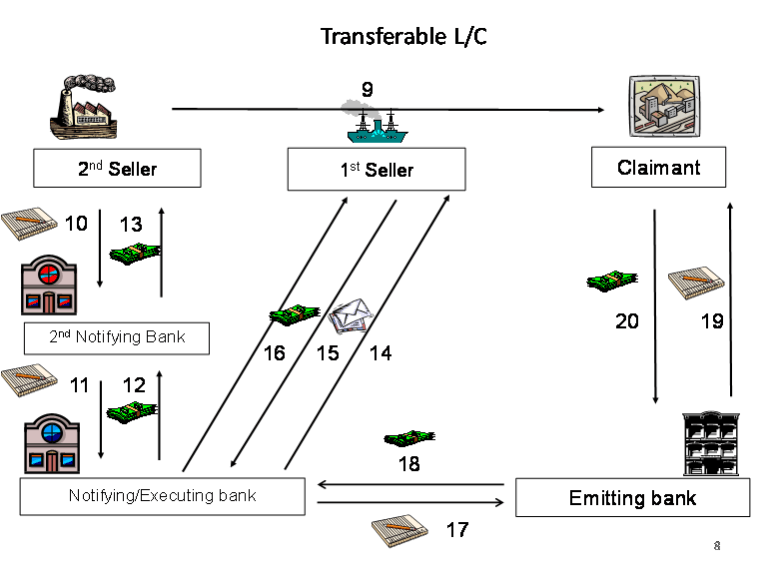 A confirmed LC is a letter of credit with higher payment security than unconfirmed letters of credit: indeed, such type of letter of credits are guaranteed both by the issuing and the confirming bank. Confirmed LCs are frequently used when selling to countries subject to political risks, that may generate default of the local issuing banks.

The beneficiary of an LC may request his bank to confirm the credit (“add confirmation”), paying a cost, if the issuing bank has accepted such a possibility under the terms of the credit.

By adding a confirmation, the confirming bank (the seller’s bank, generally) commits to honoring the letter of credit in case the beneficiary submits a compliant set of documents within the validity of the credit.

Such undertaking from the confirming bank is separate from, and in addition to, the undertaking of the issuing bank. 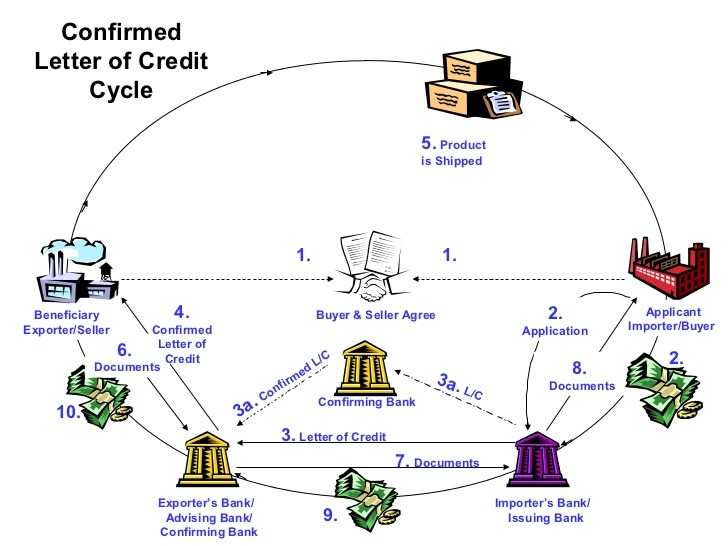 The exporter may be interested in adding confirmation to the letter of credit in the following cases:

BACK TO BACK LETTER OF CREDIT

Back to back LC’s are interesting instruments used by skilled traders/intermediaries to finance buy and sell transactions without using own capital or collaterals.
Under this schema, the trader who is the beneficiary of the letter of credit from an end user may leverage the “main LC” (export LC) and obtain a “secondary” LC (import LC) from his bank in favor of its supplier(s), without using own capital for the transaction.
A back to back transaction involves two different (but connected) letter of credits:

Under this schema, the intermediary uses the export LC as collateral to get an import LC issued by his bank, without financing such LC with own funds.
The back-to-back LC schema is represented here:

CONDITIONS FOR A BACK TO BACK LC

The key conditions to put in a place a back to back schema are:

Not all banks accept a back to back schema, as it involves some degree of risk for the bank itself. However, when banks can ensure a consequential cash in and cash out, and know the terms of the transaction well, a back to back LC may be arranged.

BENEFITS OF BACK TO BACK LETTER OF CREDIT

TRANSFERABLE VS BACK TO BACK LETTER OF CREDIT

Differently from “transferrable” LCs, which require the end user to approve the transfer of the credit from the original beneficiary to a new beneficiary (condition that is seldom accepted, as risky), a back to back LC does not require such approval and is a private arrangement between the beneficiary of the “main LC” /”export LC” and its bank.

The end user and the manufacturer of the goods may be totally unaware of the fact that a back to back arrangement has been put in place to execute the transaction.