Not all site focus on  semi-automatic sheet screen printer！

UV curing is a versatile technology employed across a range of printing and coating applications. It is suitable for inkjet, flexo, gravure, screen, offset, slot-die, Mayer-rod, roller, curtain, and spray among many other transfer and deposition methods. Mercury vapour, light emitting diode (LED), and excimer lamps all deliver UV energy to parts and substrates in production environments. Some manufacturing processes even incorporate combinations of the three technologies to achieve specific properties not possible with one single UV curing technology on its own.

UV curing enables narrow, mid, and wide-web converters to rapidly set inks, coatings, adhesives, and extrusions inline, in a small footprint, and at high speed while also producing performance properties superior to what is achievable with conventionally dried materials. UV curing is not drying. It is a molecular-level chemical reaction that transforms liquid-like materials that are wet-to-the touch into crosslinked polymers that are fully dry-to the touch. To the benefit of converters, this material transformation occurs within a fraction of a second.

UV formulations are typically 100% solids, contain no liquid carriers that must be evaporated, and require no energy consuming thermal dryers that also transfer heat to the web. Once a web exits a UV curing station, it is immediately ready for further processing, sheeting, slitting, rewinding, and shipping. Furthermore, UV cured surfaces do not scratch, mar, or become damaged when passed through downstream manufacturing line components or finishing equipment. All of this keeps work in progress goods out of inventory, reduces scrap, and facilitates quicker lead times.

UV initiated reactions create strong chemical bonds between molecules and provide superior adhesion to substrates. By comparison, conventional web and sheet drying processes leave disconnected residual solids resting on the surface of non-porous substrates such as polymer films and coated papers or dispersed within top layers of porous materials such as uncoated papers. Another characteristic of UV initiated crosslinking processes is the generation of long continuous molecular chains that drive highly desirable and robust functional and aesthetic properties.

UV cured materials naturally appear glossy and shiny. This is a result of UV formulations being 100% solids and having low molecular weights. These two characteristics allow UV formulations to smoothly and evenly flow over the web during application and then be immediately cured in place. Smooth surfaces are inherently reflective which means light is directed off the cured surface at the same angle of incidence. The more reflective a surface, the glossier and more mirror-like it appears.

UV formulators create matte or semi-gloss materials by adding mattifying agents. Mattifying agents are solid particles such as fumed silica, calcium carbonate, and wax or talc powders that cure into the surface of the material. Varying the particle size and composition of these additives impacts how light is scattered from the cured surface and, therefore, how matte it appears. Unfortunately, there are limits to the amount of mattifying agents that can be added to formulations and the subsequent reduction in gloss that can be achieved. This is because too great a concentration of solid particles decreases transparency and increases viscosity which makes the formulation harder to apply. Incorporating excimer UV lamps into curing processes enables converters to produce matte surfaces without the use of mattifying agents.

While mercury vapour, LED, and excimer lamp technologies all emit ultraviolet energy, the mechanisms generating the energy as well as the characteristics of the corresponding UV output are very different. Understanding these differences is instrumental in applying the technology correctly and maximising its value.

Mercury vapour lamps are a type of medium-pressure, gas discharge lamp in which a small amount of elemental mercury and a specific mix of inert gas are vaporised into a plasma within a sealed quartz tube. Once vaporised, mercury plasma generates broad-spectrum UV output that radiates 360° from the quartz tube. Optimally shaped reflectors located behind the quartz tube are used to concentrate the emitted UV energy onto the web or sheet. An image of several mercury arc lamps and a lamphead assembly is provided in Figure 1 (a).

LED lamps are solid-state electronics composed of numerous chips of thin, semi-conductive, crystalline materials electrically wired together in a single row or a combination of rows and columns. When free electrons in the negative region of the LED cross over to the positive region, they transition to a state of lower energy. The respective drop in energy is released from the semiconductor as a combination of light and heat. Any heat emitted from LEDs is due to electrical inefficiencies and not infrared energy.

UV LEDs emit quasi-monochromatic wavelength bands of energy when connected to a DC power source. The emitted light is projected forward from each LED a full 180° without the use of reflectors, is quickly and easily turned on and off, and has full linear adjustment of power. An illustration of three LED modules integrated into a much longer array with many more modules as well as a corresponding LED lamphead is provided in Figure 1 (b). Each of the purple squares in the graphic represents a single LED.

Like mercury vapour lamps, excimer lamps are a type of gas discharge lamp. Excimer lamps consist of a quartz tube which serves as a dielectric barrier. The tube is filled with rare gases capable of forming excimer or exciplex molecules. Different gases produce different excited molecules and determine which specific wavelengths are emitted by the lamp.

A coiled electrode runs along the inside length of the quartz tube while ground electrodes run along the outside length. Voltages are pulsed into the lamp at high frequencies. This causes electrons to flow within the internal electrode and discharge across the gas mixture toward the external ground electrodes. This scientific phenomenon is known as dielectric barrier discharge (DBD).

As electrons travel through the gas, they interact with atoms and create energised or ionized species that produce excimer or exciplex molecules. Excimer and exciplex molecules have an incredibly short life, and as they decompose from an excited state to a ground state, photons of a quasi-monochromatic distribution are emitted. An image of an excimer lamp and corresponding lamphead is provided in Figure 1 (c). 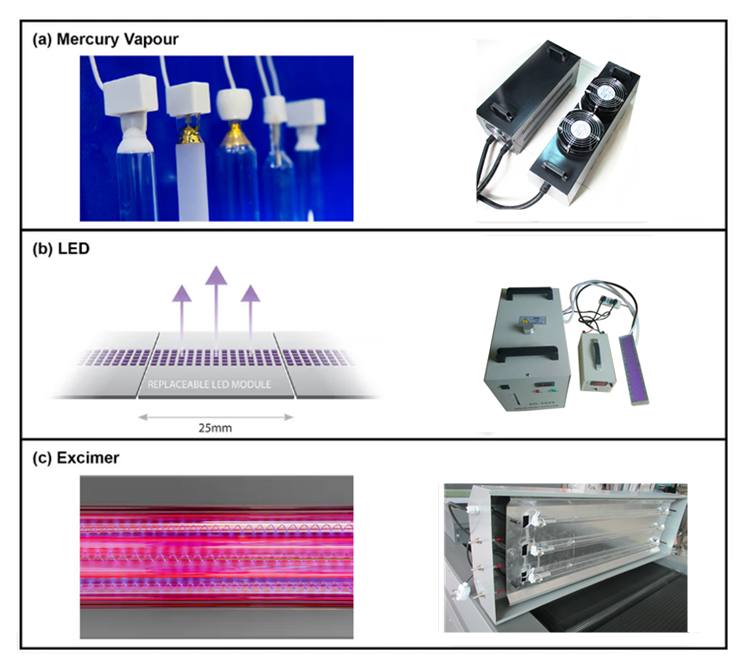 Photons of vacuum UV (100 to 200 nm) contain the most energy of all UV wavelengths but are completely absorbed within the top 10 to 200 nm of a film. As a result, 172 nm excimer lamps only crosslink the outermost surface of UV formulations and must always be integrated in series with mercury or LED systems to achieve full depth of cure.

Whenever an applied UV film is exposed to wavelengths around 172 nm in a nitrogen inerted environment, the top of the film instantly wrinkles and pulls away from the underlying, uncured material. This wrinkling introduces microfolds and increases the total surface area of the ink or coating. This makes excimer ideally suited for mattification and eliminates the need for mattifying agents.

A two-stage cure process uses excimer to surface cure and either mercury or LED to final cure. A three-stage cure process incorporates a low power LED or gallium doped mercury arc lamp prior to the excimer lamp. This “pre-gelling” lamp increases the ink or coating viscosity to limit flow out and improve the uniformity of mattification across the web; some limited control over gloss level is also achieved. An illustration of a stepped excimer UV curing process is provided in Figure 3. 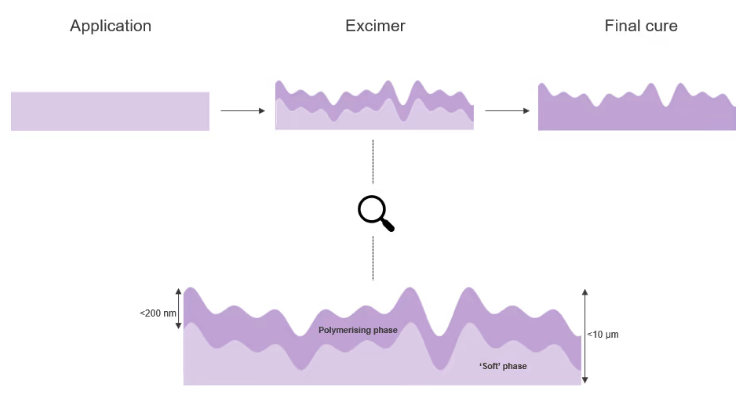 Figure 3:  Mattifying process using excimer in combination with either mercury vapour or LED for final cure.

Wrinkling a film surface using excimer lamps produces a rougher surface compared to mercury vapour or LED cured formulations. Rougher surfaces allow greater amounts of light to be absorbed into the cured material while also scattering reflected light in many directions. The result is a beautiful matte appearance that offers anti-glare and anti-fingerprint protection along with the stain, chemical, and physical abrasion and wear resistance always associated with UV curing. Very low gloss ratings around 2 GU are not possible with mattifying agents but are easily achieved with excimer UV curing. In addition, despite having a rougher surface compared to materials cured with strictly mercury vapour or LED, the increased surface area produced with excimer lamps also makes cured surfaces soft to the touch.

Excimer UV curing on web and sheet widths up to 2.3 metres is utilised in numerous industrial converting applications. Processes and products requiring a consistent and controllable matte finish are best suited to this technology. Examples are finish and wrapping foils as well as decor papers, all of which use excimer lamps to create quality surfaces on furniture and interior design products. Laminate and PVC flooring incorporated into high foot traffic rooms and walkways as well as hospitals and laboratories desiring more sterile and stain resistant surfaces are also common uses. Others include glass and plastic parts and assemblies used in electronic devices, automobiles, and other industries where anti-glare and anti-fingerprint surfaces are desired. While excimer technology is not new, it is certainly receiving increased attention from converters and product manufacturers. This is because excimer UV curing offers incredible final product performance functionality that simply cannot be accomplished using any other method.